About 6 months ago my Brother came over and handed me our Dad’s old Garrard 301 turntable and SME arm that we grew up with.  The significance of this cannot be underestimated as it was the record deck that inspired our interest in Music and HiFi, and was ultimately the reason why HiFi Cinema exists.  Its a journey that started in about 1963.

It was still in the top part of the plinth which was a large chipboard cabinet housing the records underneath, and had little in the way of isolation (some rubber pads). 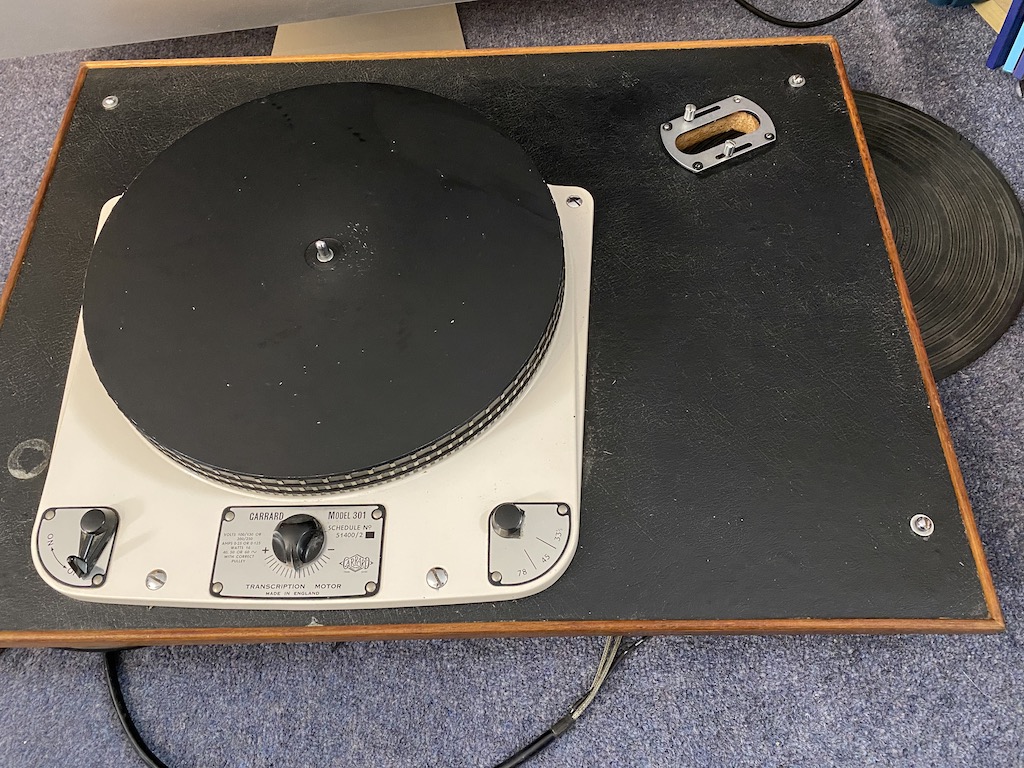 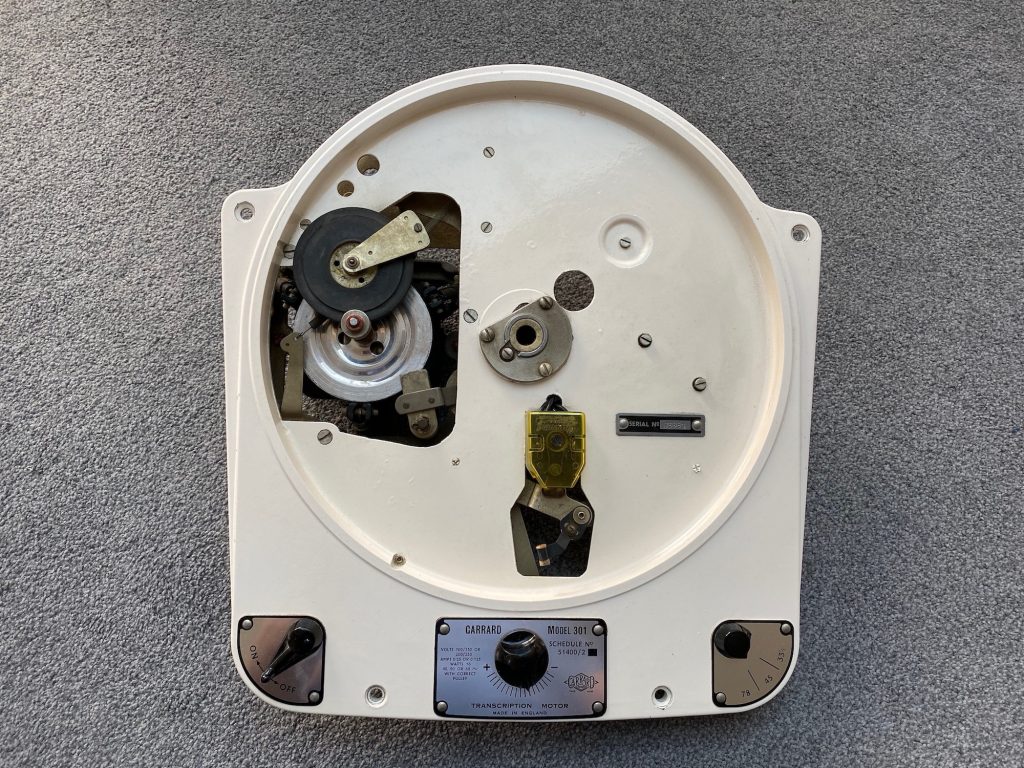 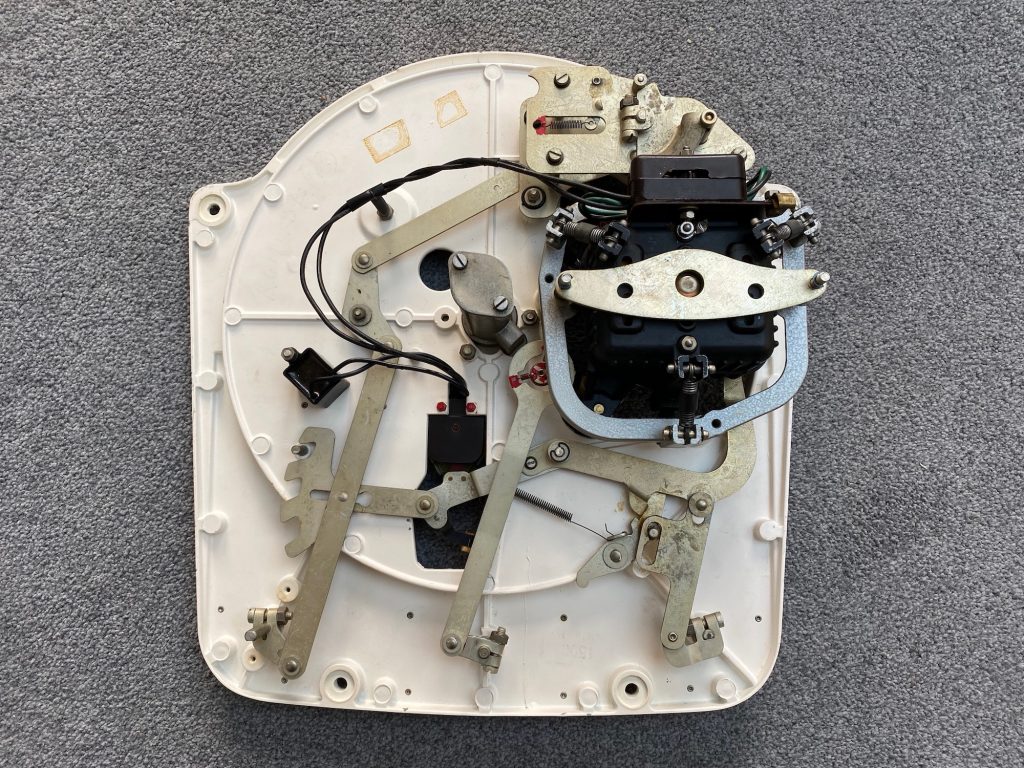 I sent the Turntable chassis to Ray Clark at Classic Turntables for a refurbishment and some upgrades.  He stripped it down, replated the linkages, replaced the motor springs and rubbers, put new motor bearings in, brand new Idler wheel (that drives the rim of the platter), and a new solid machined Aluminium chassis plate which is much thicker and stiffer than the standard one (which was cast) particularly around the bearing housing which is very important. It also had new knobs and suppressor / switch assemblies.

The result was a spectacular transformation – it looks better than it did when it was new: 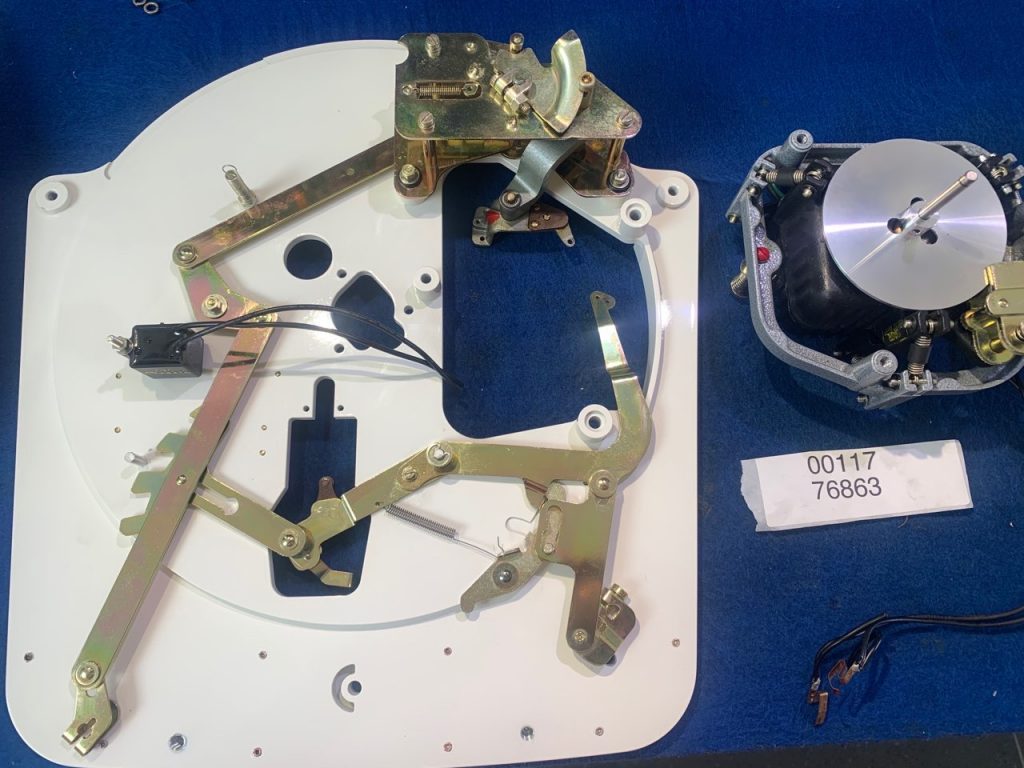 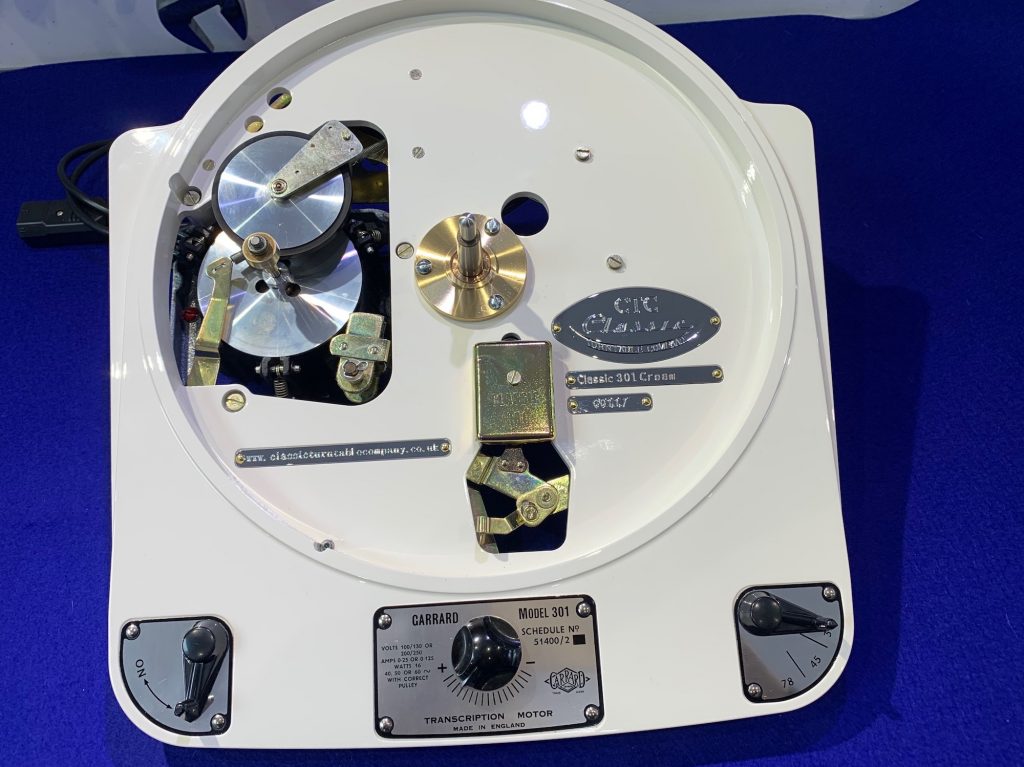 The brass main bearing was new, with a much closer tolerance than the original and a bigger mounting plate to couple to the stiffer chassis.  This all reduces the slop and vibration between the arm and the record thereby cleaning up the resultant clutter.  The importance of a good main bearing is often underestimated but is fundamental to sound quality.

The next stage was to wait patiently for the new Plinth which was designed and built by Lee Drage of Acoustand.  It arrived some weeks later (Lee’s plinths are in huge demand – and I can see why) The design and finish were superb, and everything fitted perfectly first time.  I had to source some Imperial size socket head screws of the right length to mount the 301, but a quick internet search came up with a supplier called “Balls Grinding” – no comment.  (Run by a guy who’s surname is Balls I believe)

The Plinth is made from 5 layers of MDF which are loosely bonded together by applying an elastomer glue in a cross hatch pattern.  This gives some resilience and sound absorption between the layers.  The arm mounting is machined from a very thick solid Aluminium chunk for accuracy and rigidity and comes with all the hardware.  The slot allows adjustment of the arm back and forth, to compensate for cartridges of different lengths and mounting holes. 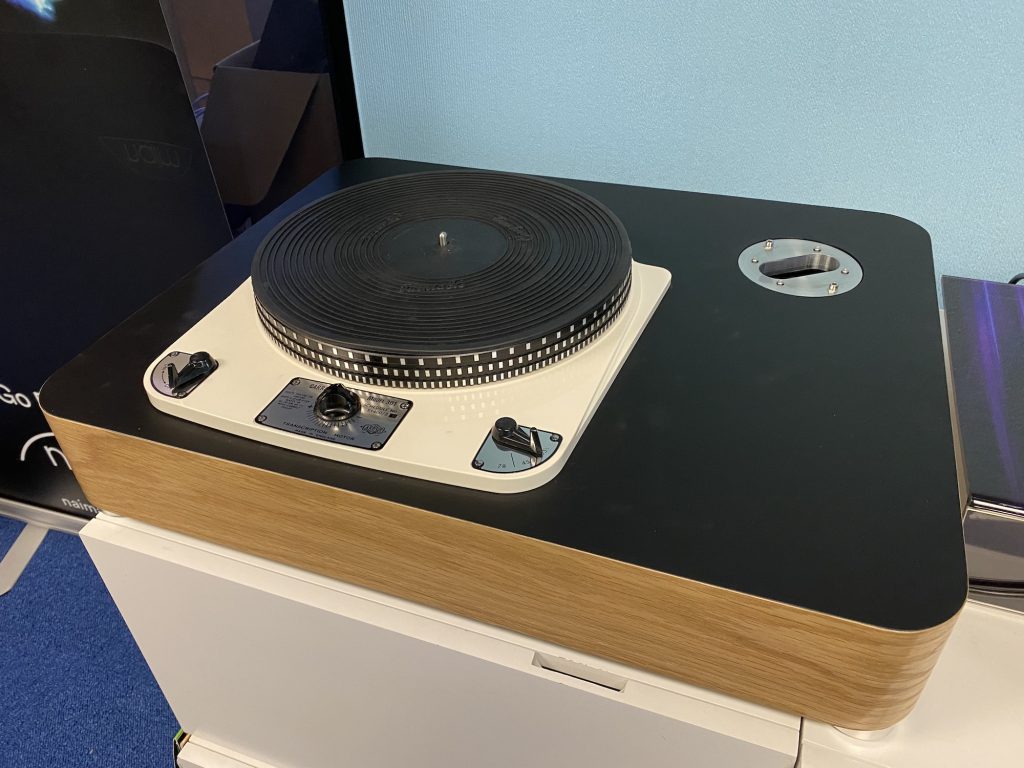 The next stage was to rewire the superb SME 12″ Series II (3012) arm. It was still in its faded box with a plethora of old Sure cartridge bits and counterbalance weights, and part of an old Watts Dust Bug.   I started by cleaning the surfaces with Mr Muscle Glass Cleaner and it came up like new.  There was a crappy wiring loom that was well past its best, so I found online a little company making upgrade wiring kits – The Vinyl Source, and the kit uses continuous Litz wires from the headshell right to the Phono plugs without any other connections in between.  Rewiring the arm was fiddly and time consuming but well worth the effort. 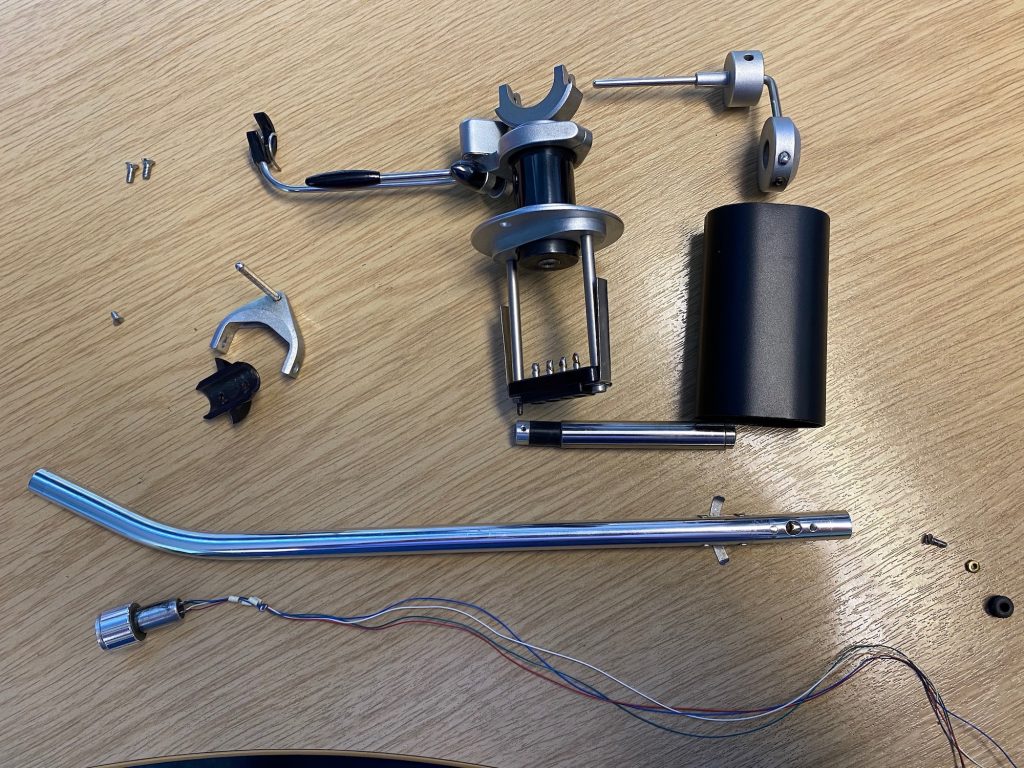 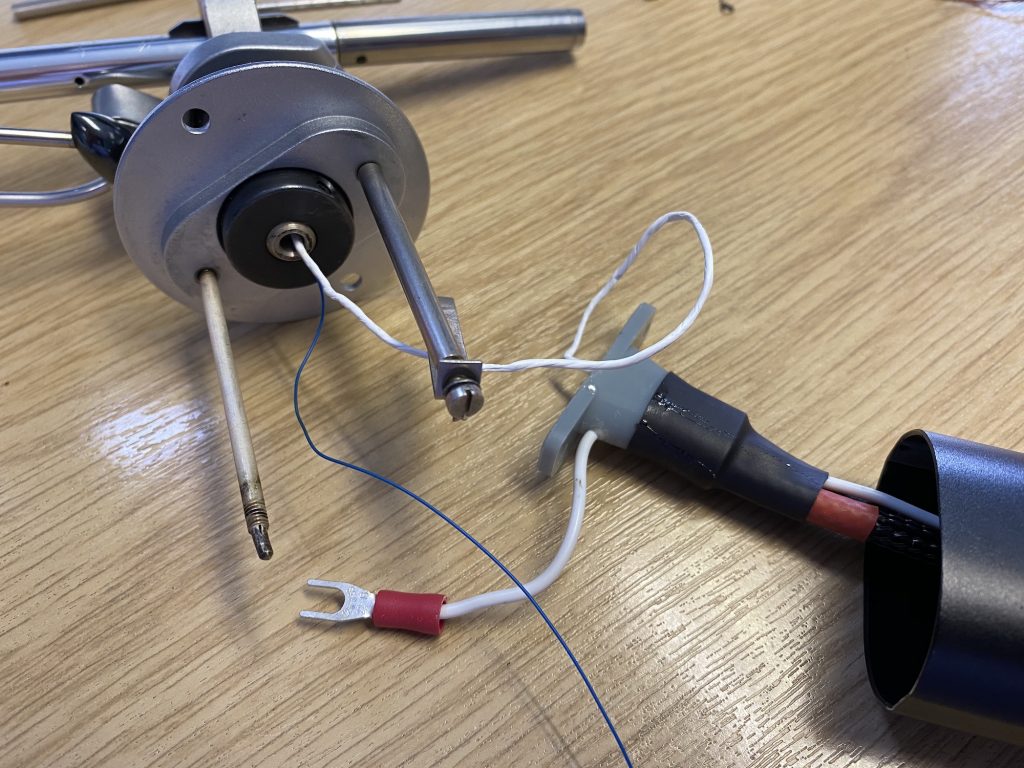 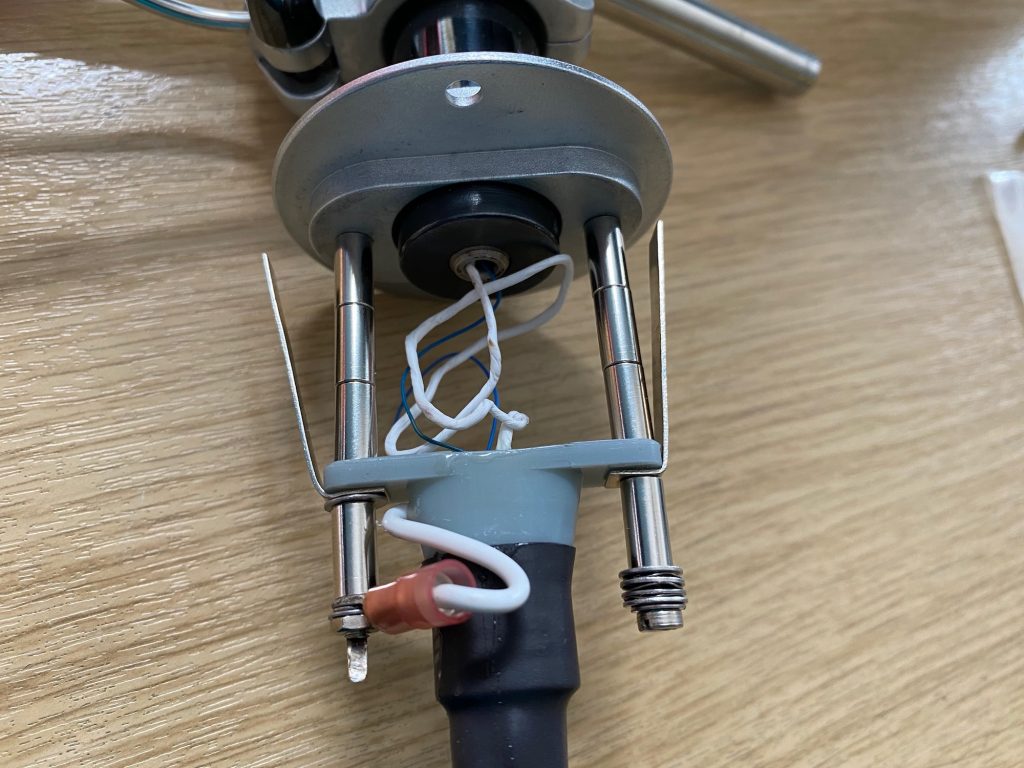 Fitting the arm and adjusting: 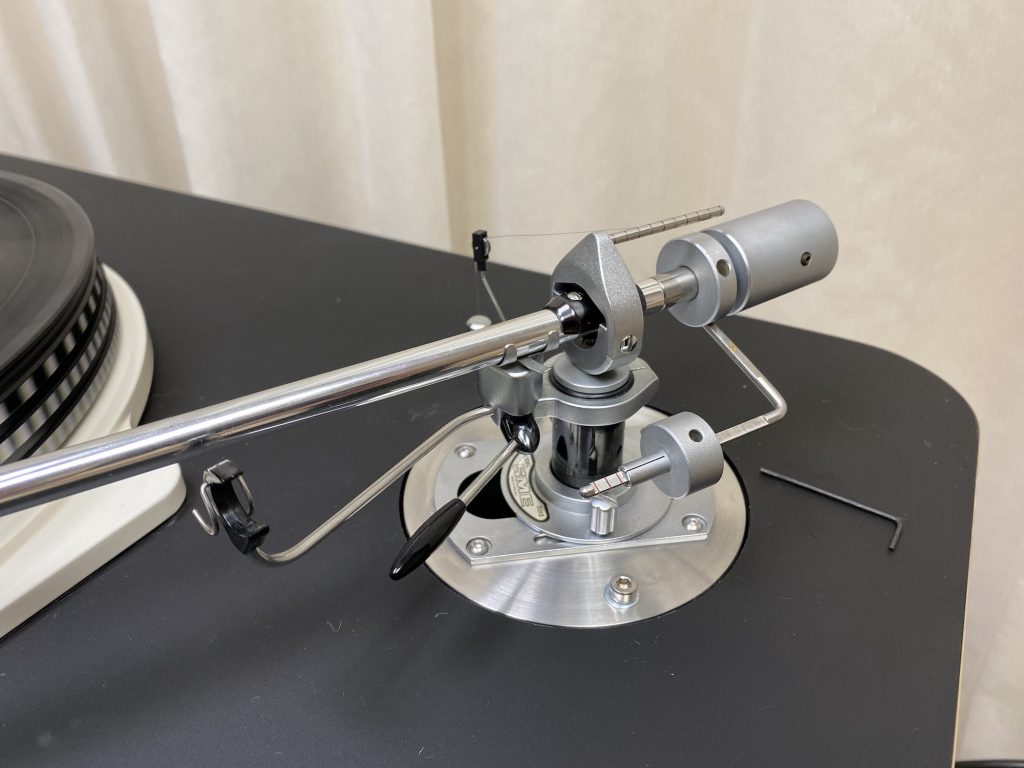 First cartridge tried – a nice Ortofon Cadenza Blue we had kicking about ! 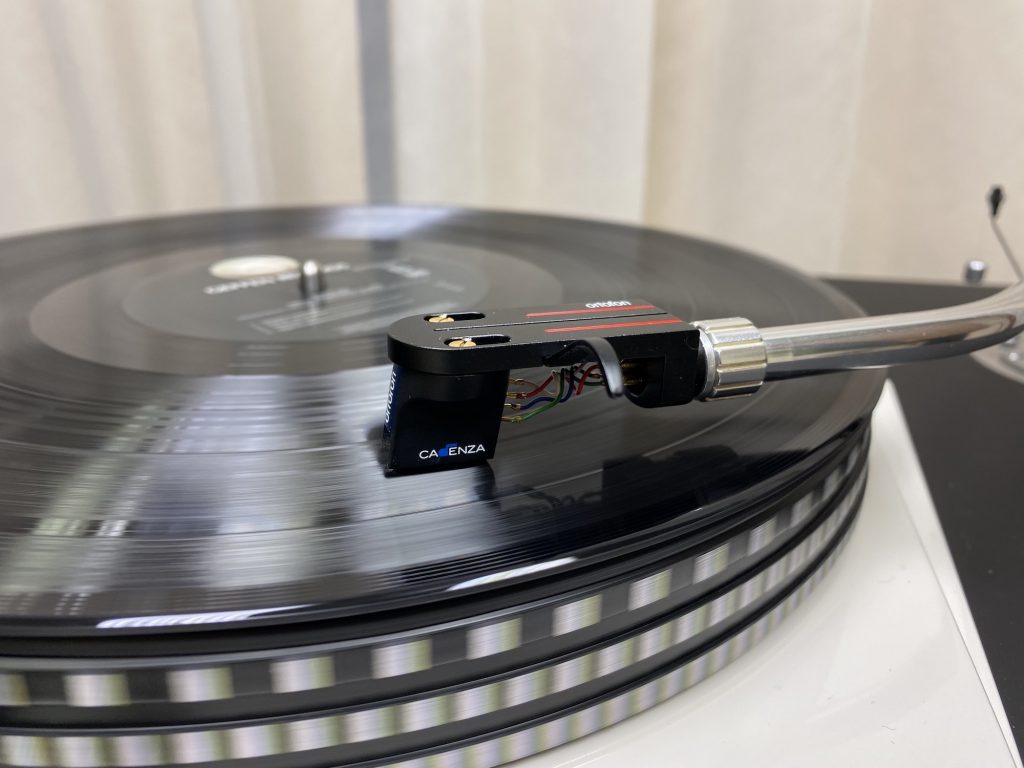 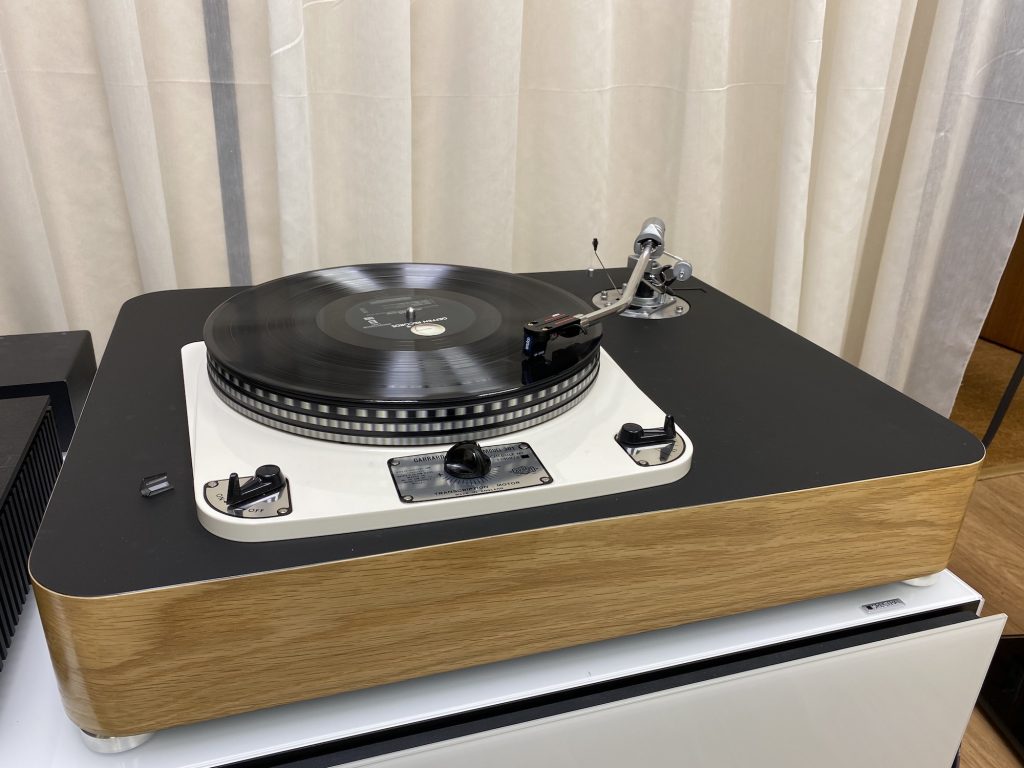 There were a few (expected) teething troubles, mostly to do with noise (motor and idler rumble and hum) but Ray had advised that everything needs running in – all the bearings were new, and by adding his ingenious external power supply, you can accurately set the speed (rather than relying on the mains frequency and the Eddy Current brake) and at the same time reduce the Voltage a little to the motor, which in turn reduces the noise and improves accuracy.   I left it running overnight, and the next morning it was virtually silent.  One source of hum was the mechanical vibration from the amp sat next to it on the cabinet.  Simple test – stop the platter rotating, place the stylus on the record and turn the volume up.  You can then tap the plinth and cabinet and get a feel for the noise induced from the cabinet its sat on.   It wasn’t great (as expected) but until the new Podium Reference Rack arrives I have no where big enough to mount it on with any degree of isolation !

I popped some “Vibrapod” Isolators under the feet and lost about 20dB of the feedback which cleaned things up immensely, and then added the new oversized solid brass platter from Classic Turntables.  This fella weighs in at 12Kg !  Thats almost 10Kg heavier than the standard Aluminium one.   I do miss those little strobe markings on the rim though …… 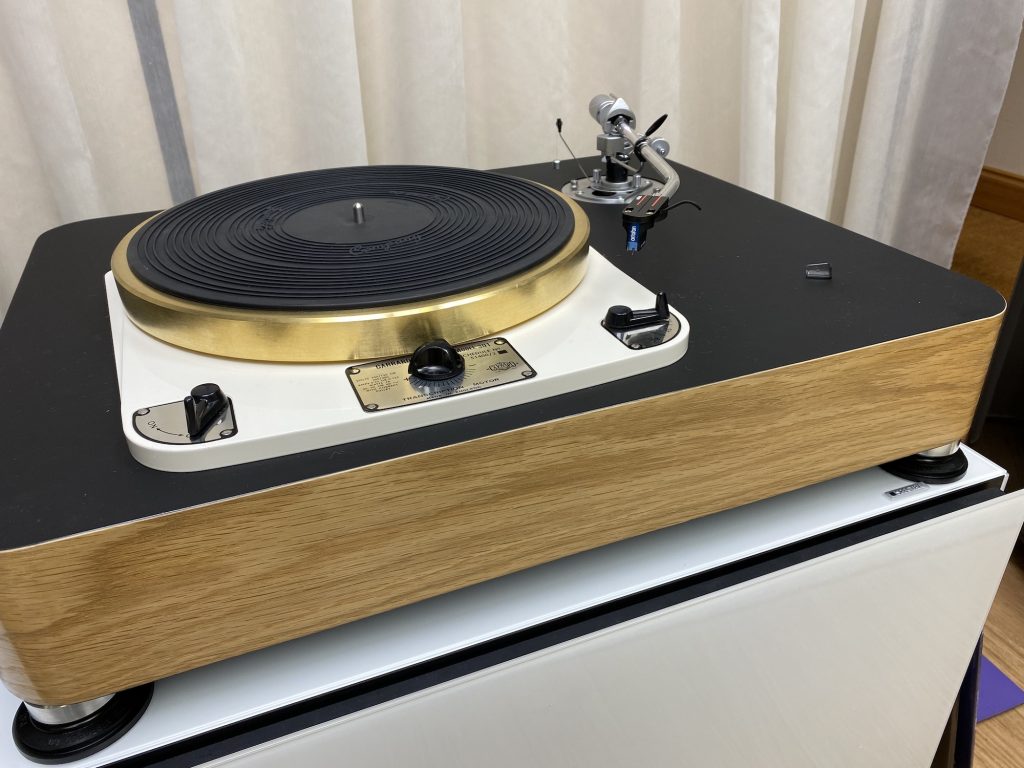 The result is completely surprising.  We’ve got used to listening to the top spec Linn Sondek LP12 (Nearly £19K worth) and the Technics SL1000R with an 8 grand cartridge in it via some pretty damn good systems (Naim Statement / Focal Scala Utopias) and this 60 year old deck really shone through.  Big soundstage and a 3 dimensional punchy bass end that the others couldn’t manage, the midrange is open and uncluttered and the Brass Platter added to the focus and 3d Imaging.  Musically its one of the best decks I’ve heard – very involving.

I can’t wait to get it on the Statement system in the main showroom, but that will have to wait for the Rack. (Sounds like a follow up is due 🙂

So, Dad, if you’re up there listening and reading this, you’ll be proud of what your old 301 sounds like again ………

The Saga Continues !    We’ve now taken delivery of our new HiFi Racks Podium Reference stand.  This was needed on two counts, the first being a very deep power amplifier for our cinema system (an Anthem MCA 525) which was too deep to go in our Naim Fraim, the second being somewhere to mount the Garrard 301 in its enormous plinth !

The importance of isolating vibration from the plinth cannot be over emphasised, and the Podium reference was just the right solution, being spiked into the concrete floor.

I also fitted our prized MySonic Labs, Signature Platinum cartridge (If you have to ask the price – you can’t afford it !) and a large solid aluminium spacer under the arm (gratefully supplied by Lee Drage at Acoustand) – this gives it better support at the required height for the cartridge. (Less unsupported length in the vertical arm tube).

The phono stage is one of my favourites – a Lehmann Decade, and I connected this to our Naim Statement pre-amp with a Naim Super-Lumina phono lead (About 2 grands worth), this drives a NAP500 power amp into the Focal Scala Utopia’s.   Should sound OK then ? 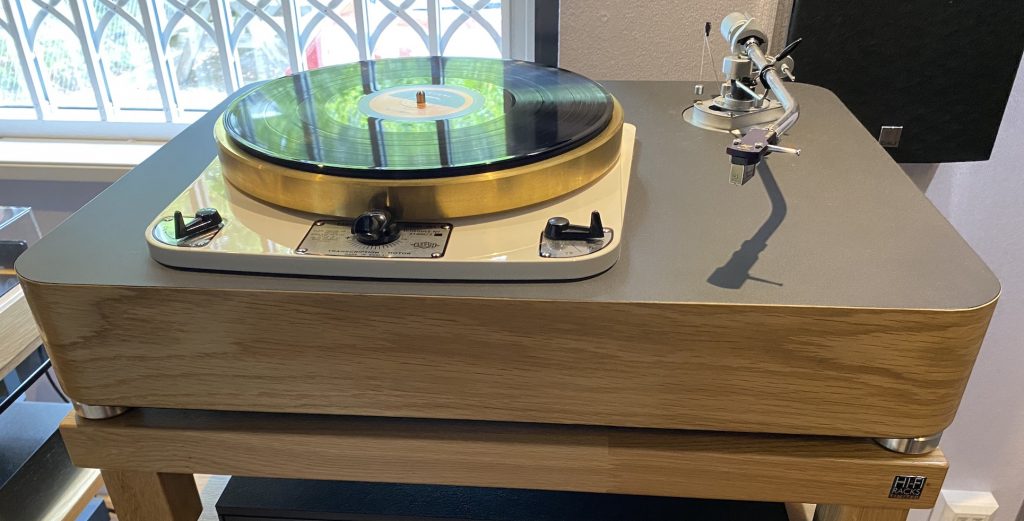 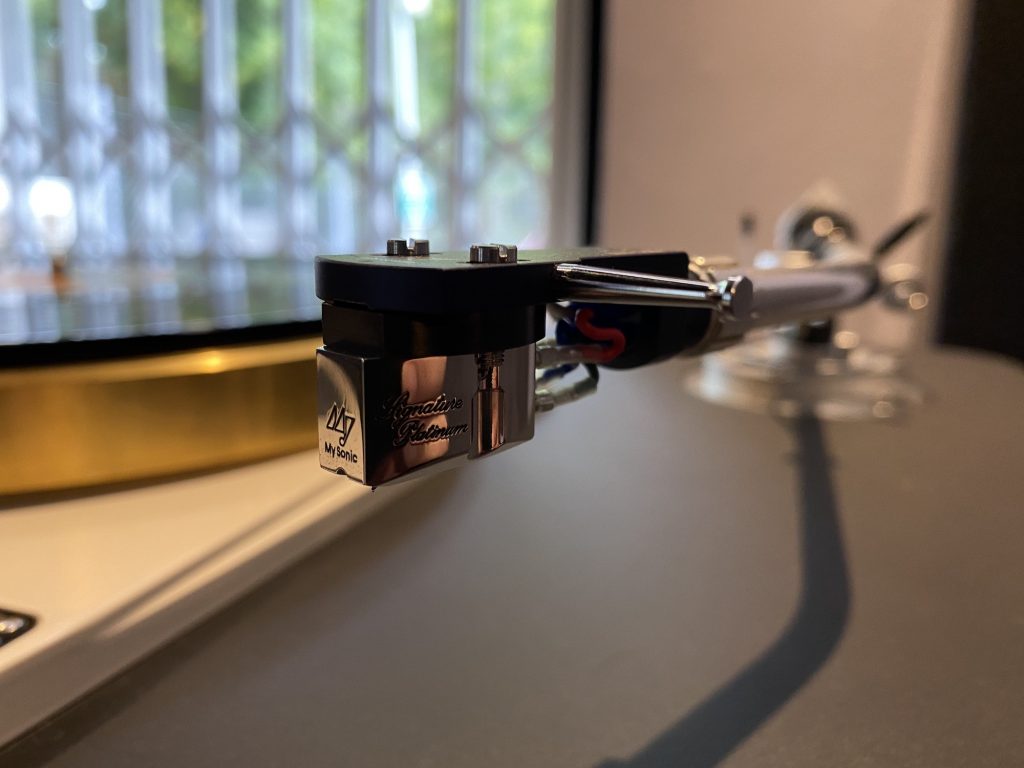 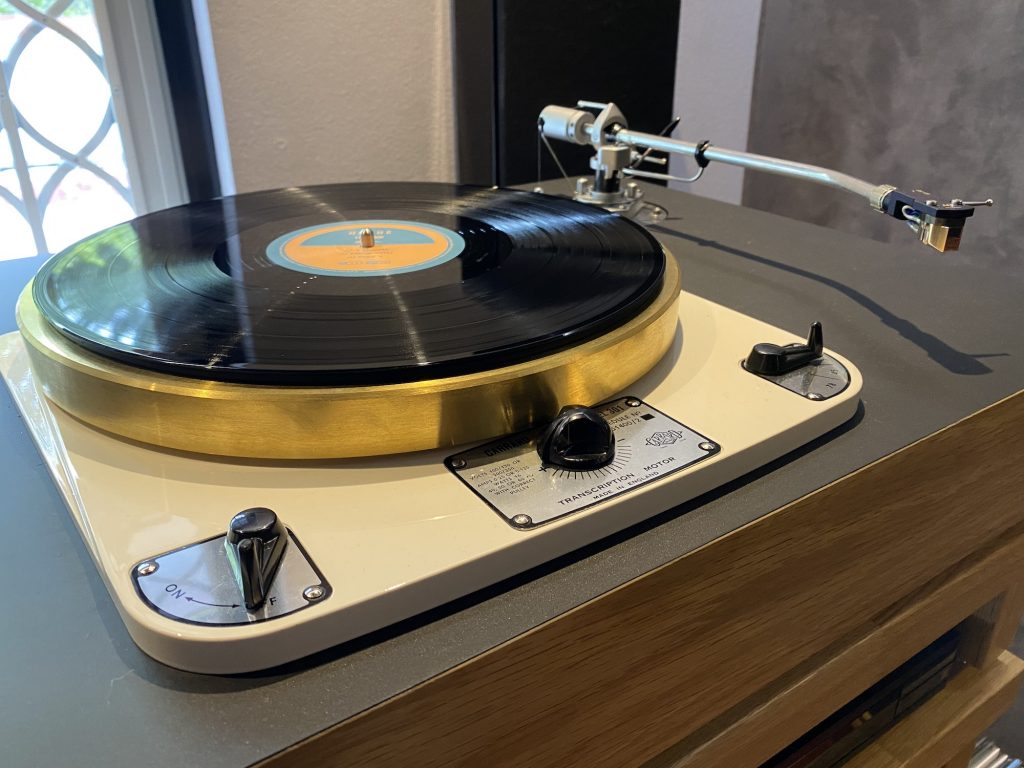 Well my jaw hit the floor on the opening bars of Dire Straits “Love over Gold” (Mobile Fidelity Sound Labs Audiophile pressing).  I’ve listened to some pretty amazing decks in my time, but never heard such a massive 3 dimensional soundstage, pinpoint imaging, and uncluttered, musically involving sound.  It is without doubt the best disc spinner I’ve ever heard.  I had to take a moment to put my bias to one side – was I imagining this ?   I’ve played it to several customers now and the opinion is universal.  On to something more up to date, “I Might” by Honne – huge, punchy, powerful with the cleanest bass end and that huge room filling sense of space.   Mike Valentines recording of “Vivaldi in Venice” (Chasing the Dragon records) was the best I’ve heard it.   Better than the Technics SL1000, better than the top spec. LP12 (with external phono stage), in fact better than everything I’ve heard.

I was expecting this “old tech” to have its little niggles and vices, but there simply are none, no resonances I can detect, no clutter, no uneven frequency response, and when you consider its nearly 60 years old, it shows the fundamental design was spot on.   I’m sure I can squeeze a bit more out of it in time, but for now I’m putting my feet up to enjoy.