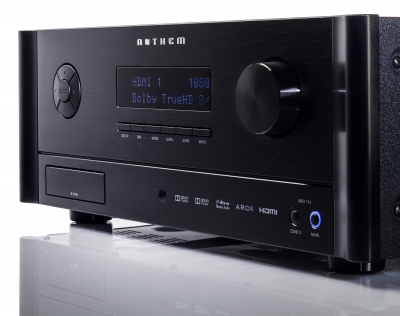 Thursday the 12th October saw our Anthem MRX-710 launch spectacular, which as it turned out was a bit of a world exclusive. Due to a mix-up in dates at Anthem, we ended up with a preview that was a world first, as the official launch date was the 15th!

Launch semantics aside, we were hugely impressed by this AV amplifier. Anthem have massively improved the styling (well, the old ones couldn’t be any uglier!), they have upped the number of HDMI inputs to a very useful 7, and added another HDMI output which is useful for systems combining a TV and projector. HDMI has both 4k pass-through and up-scaling for a degree of future-proofing, and much improved video switching between sources.

The Anthem MRX-710 on-screen menus are much snappier and easier to read which gives an altogether much better quality feel. The Anthem Room Correction (ARC) system has much greater signal processing power improving the already superb room correction system. For system installations, the unit is capable of being driven from network devices and is compatible with iOS and Android Apps for control.

The sound too has been improved over the MRX-700, with a detailed and capable ouput, punching well above the £2200 price tag.

I’m sure we’ll be installing a few of these, and it’s jostling for the front row in our go-to choice of AV receiver.