We are continually surprised by the number of properties we visit where there is inadequate wiring for satellite and TV reception around the home. This article is meant as a rough guide for the requirements for terrestrial TV reception and distribution in the modern home.

It is always better to have a good signal from a decent aerial installation, than to try to recover a poor signal with the use of amplifiers – we are able to provide all of your aerial system requirements through Paul at All Digital TV (see our Friends page).

This rough guide is appropriate for the first three, as wiring for the Internet TV streaming distribution has been covered in our article “Wiring for Home Data and Telephone“. 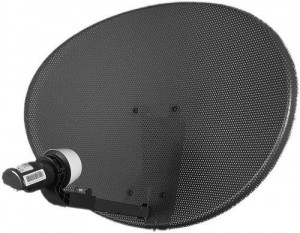 In general a TV broadcast signal is received in the home via an antenna (or cable in the case of Cable TV). This has to be appropritate for the signal being received, so is usually a yagi antenna for terrestrial TV (above), and a satellite dish for satellite reception (right). In both cases the antenna has to have a clear line of sight to the transmitter – this is either up to the sky facing roughly south for the satellite dish, or towards the nearest transmitter tower for terrestrial TV – a quick look at neighbouring houses will usually give you an idea of roughly which way the antenna needs to point. If there are no convenient neighbours, or their antennas are hidden, then some advice may be needed from a Confederation of Antenna Installers (CAI) installer.

Knowing which way the antenna needs to point is important as it may limit the options of where the antenna can go, and is required if you want to install cables to a workable antenna position during first fix installation. 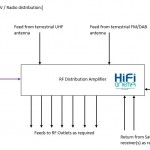 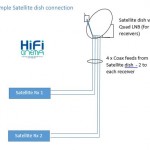 Cables are run from the antenna position(s) to a central location where a distribution amplifier or splitter can be installed to send the signal to each TV position as required, However for satellite, the cables are usually run direct from the dish to the satellite receiver position, unless there are likely to be more than four possible receiver positions.

Choices affecting the cable runs and equipment include:

Where there are more than four satellite receivers (or more than four possible positions where a receiver might be plugged in, there needs to be either an antenna patch panel so the cables can be plugged into the satellite feeds, or a Multi-switch distribution amplifier. This is not just a simple distribution amplifier, as it needs to allow the satellite receivers to switch between the different bands and polarisations. Some of these multi-switches can also diplex on the terrestrial TV and radio signals too (see picture (right). 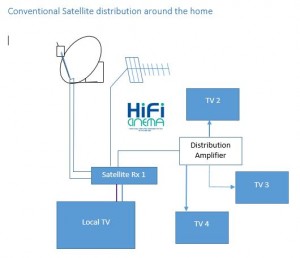 Where people do not want to pay for multiple satellite subscriptions, it has been possible in the past to view the satellite reception from a number of TVs as the satellite signal is modulated onto a TV signal that is distributed around the house with the regular TV signal. Sky receivers did this for years, however there are a number of problems with this: The signal is only in standard definition – not HD, and all of the TVs will see the same picture. The latest sky boxes, also do not have modulators built in – this has to be added as an external unit. If you want to see the Sky picture in full HD on more than one TV, the choice is to send it to the other TVs via the HDMI signal. If the other TVs are close (within about 10m), it is possible to split the HDMI signal, however for greater distances or for viewing multiple satellite receivers, an HD Matrix switch may be used. 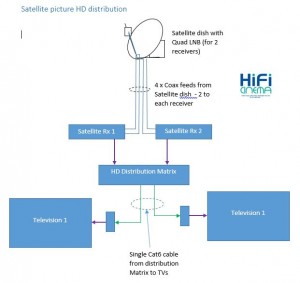 The matrix switches generally take in HDMI sources, and switch between them to drive Cat6 outputs to run to the remote TVs. Distances can be up to 60m or 100m depending on the system, and the remote TVs can switch between multiple sources i.e. more than one sky box and/or Blu-Ray player, CCTV etc. The receiving TV can view the full HD image, however due to the nature of HDMI with multiple displays, the system will default to the lowest resolution of sound and picture that any of the TVs can receive. The HD Distribution matrix switches come in set sizes of 4×4, 8×8, 16×16 etc. A 4×4 matrix means that any of 4 inputs can be viewed from up to 4 TVs. These pass back IR commands, so the remote TV position can control the source device too.

HD distribution via a matrix switch typically uses Cat6 cables, so is usually combined with a more structured approach to wiring and combined with the wiring scheme for the Home Data Network (see our article on Wiring for Home Data and Telephone). If a patch panel is used at the central data hub, the the matrix switch can go there to and a simple patch cable connects the Matrix switch with the appropriate output by the TV.