Every now and then a new product comes along that shakes up your understanding of things. The Melco N1 Music Servers are just such products.

The NAS drive installed in a high-end digital streaming music system is firmly in the computer domain, however it turns out that the way it operates has an impact on the sound that comes out of the speakers. I originally thought that this area was parametrically isolated from the music, however because of the way that network traffic splits data streams into packets, the packets can get re-ordered by other network traffic. This means the streaming player has to spend time and effort re-assembling them in the correct order again, and this adds significant jitter into the decoded data stream affecting performance. I found this hard to believe, as I thought most decent streaming players went to extraordinary lengths to de-jitter the re-assembled data streams. The proof however was in the playing, and sufficient enough for us to spend some significant money on updating our demonstration NAS drive.

The key thing with the Melco Music Server, is that it is a NAS drive with a dedicated network port for the streaming player. This effectively isolates the player from any unwanted network traffic, and sends a highly regulated music data stream to the player, to remove as much jitter from the stream as possible. It still makes the music shares available to other connected devices around the home network, so in this repect looks like a conventional NAS drive.

We’re just in the process of moving all of our music onto the new Melco Music Server, and will have it as the main storage and source of our music from now on. We are astounded at the difference this makes, for not much more money than a conventional NAS drive.

There are two models the N1A which has conventional hard disks etc, and the N1Z, which they have gone to town on with SSD memory, vibration damping enclosure, and super low noise power supplies etc.

If you have no digital music streaming player, the Melco music server can take a high resolution USB DAC into one of it’s USB ports, and send a consistent high quality stream directly to it: 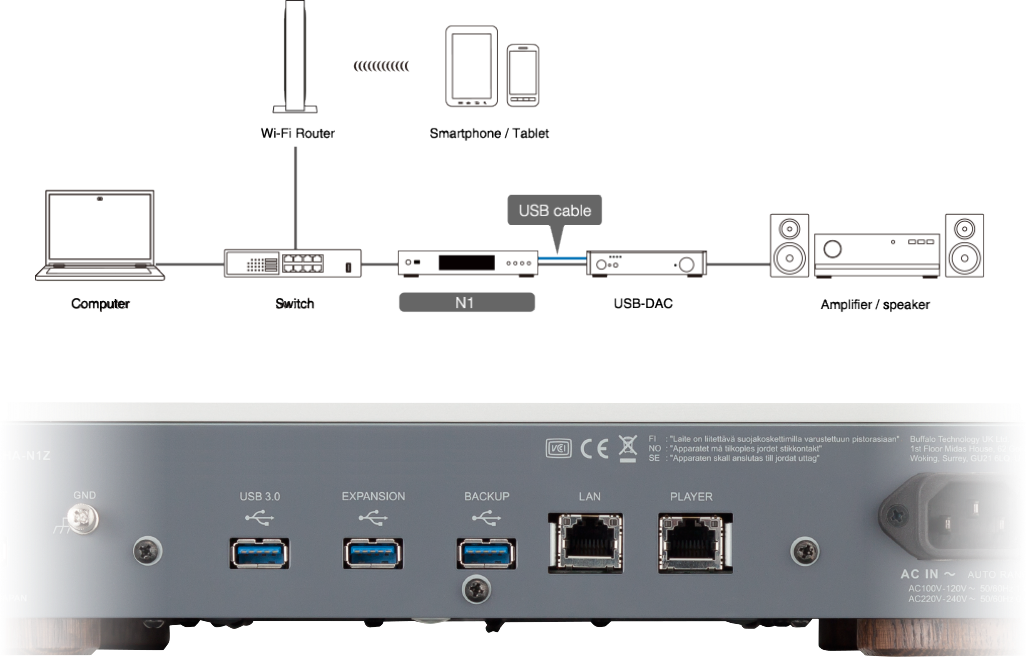 These Melco Music Servers are really worth coming and having a listen to, as they make a super improvement to the sound quality you get from a digital streaming player. Don’t just take our word for it, but come and hear for yourself!