Some manufacturers come to our attention because of our search for better and better sounding equipment, and T+A is one of these.

We were looking for a high end CD player to replace the Naim CD555, which is no longer manufactured, and were drawn to the T+A  PDP3000HV

The PDP 3000 HV is the most sophisticated player in the HV series, and has been developed specifically to reproduce high-resolution audio data without any trace of compromise. For this reason T+A have equipped the machine with a uniquely superior disc mechanism which reads CD and SACD media perfectly, and transfers their data to its superb PCM and DSD converters. To convert PSM data T+A are using their superb Double-Differential Quadrupel Converter and for the conversion of DSD data up to DSD 512 T+A have even developed a new technology: the unique T+A True 1-bit DSD Converter, a genuine analogue single bit converter. Since this unique converter concept is ideal for use with external sources, T+A have also designed the PDP 3000 HV to operate as a DAC, featuring seven digital inputs! This technology is unparalleled on the world market and explains the huge number of excellent reviews for their DPD 3000 HV.

This machine simply has to be heard to be believed We’ve given it a try as a straight forward CD player, and it astounds, being really comparable to the latest in Linn Klimax DSM streaming playback. It’s probably the best sounding CD player we’ve ever heard!

We then tried it with a Melco Music Server driving the USB DAC input, and this was in a league of it’s own, bringing the delicacy and focus with an immediacy and warmth that felt smooth and analogue. There was no hint of shouty “digital” stuff going on, and we were hooked!

This product has since been superseded by the MP 3100 HV Multi-source SACD player, and the PDT 3100 HV reference CD/SACD transport: 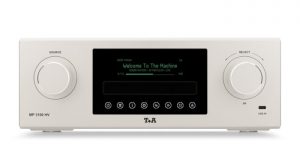 The MP 3100 HV is T+A’s latest and most sophisticated multi-media player. The basic design philosophy stems from the MP 3000 HV, but the MP 3100 HV is now capable of carrying out the full signal processing of DSD bitstream data in addition to processing PCM data to impeccable standards. This extensive development was necessitated by the machine’s new integral disc mechanism: an SACD drive which is a completely new development, featuring the very latest decoder, and capable of reading CD (PCM 44.1 kSps ) and SACD (DSD 64 2.8 MHz) discs at the highest possible quality. The other digital sources, both integral and external, also benefit from this new improvement. As in the MP 3000 HV, PCM data is converted using our outstanding double differential quadruple converter for all the digital signal processing. DSD data are handled by the unique analogue true 1-bit DSD converter from the PDP 3000 HV, which processes the DSD data in native form as a bitstream rather than converting them. 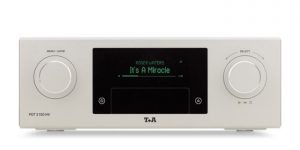 The PDT 3100 HV is a purist CD / SACD mechanism which does not feature supplementary integral digital sources or converters. It has been developed uniquely and exclusively for the uncompromising task of reading SACD and CD, and is fitted with a new decoder / drive mechanism which we have developed from the ground up. This mechanism reads and decodes CD and SACD without error and to the very highest standards of quality. The mechanism is integrated into a heavy drive unit manufactured to rigidly high standards, designed to shield and isolate it completely. The mechanical system is extremely refined. 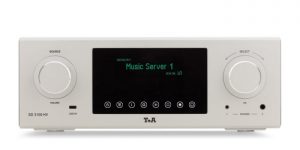 Add to this the SD 3100 HV DAC and you have the ultimate CD playback system:

The SD 3100 HV is a purist converter / streamer which in an HV system acts as ultra-high quality player and converter for every imaginable digital source. It can be connected to the P 3000 HV pre-amplifier or the PA 3100 HV integrated amplifier via one of its analogue outputs. If you wish to play CD or SACD, the PDT 3100 HV reference disc mechanism can be connected to the SD 3100 HV.
The SD 3100 HV – and also a full HV system – can be controlled using the
F 3100 remote control handset or one of the T+A apps.